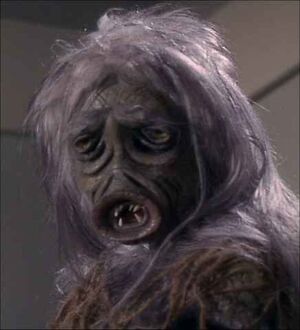 Star Trek
Salt Vampire, or M-113 creature, is the unofficial nickname given to a now extinct sapient species which once inhabited planet M-113. This creature is notable for requiring extremely large quantities of salt, specifically sodium chloride, to live. It can remove salt directly through the skin of other beings using the sucker-like structures on its fingers, a process which usually results in the death of the victim. Also noteworthy are the creature's illusory shapeshifting abilities. Although it cannot physically change its appearance, it can use telepathy to project an illusion into the minds of those around it, making it appear like any person it wants.

The Salt Vampire is a humanoid being about 1.5 meters tall. It has brownish skin and long white and purple fur covering its whole body, except for its face and hands. Its yellowed eyes and the deep folds on its face give it a distinctly sad appearance. It also has a tubular mouth equipped with sharp, needle-like teeth. The creature uses this mouth for consuming salt and probably other food sources as well. However, it also has three long fingers on each hand, each finger sporting three suckers similar to those found on the tentacles of Earth's cephalopods. These suckers are used by the creature to extract salt directly through the skin of a living victim, which is usually killed in the process. The Salt Vampire is amazingly strong, being able to easily defeat a Vulcan in a fight. However, the Vulcans' copper-based blood system lacks the kind of salt which the creature feeds on, which is sodium chloride, the same salt consumed by Humans.

In spite of its beast-like appearance and behavior, the Salt Vampire was actually a sapient and highly intelligent being. Its home planet, M-113, is currently a desolate desert world filled with ruins of an ancient civilization. Since the Salt Vampire encountered by the USS Enterprise crew in 2266 was the last member of its species, it is likely that its psychopathic killing behavior may have been atypical, possibly driven by insanity caused by a long period of isolation and an urgent biological need for salt.

Whatever its background was, what we do know is that the last of Salt Vampires entered aboard the Enterprise "disguised" as a crewman it had previously killed and started to look for new victims. The creature was finally killed by Dr. McCoy after trying to attack Captain Kirk.

Retrieved from "https://aliens.fandom.com/wiki/Salt_Vampire?oldid=191190"
Community content is available under CC-BY-SA unless otherwise noted.