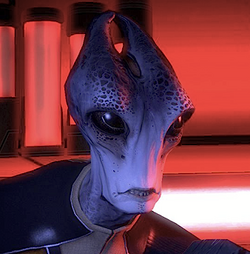 Mass Effect
Salarians are a race of amphibious humanoids. Their livers were considered a delicacy by the Prothean Empire during its heyday.

The second species to join the Citadel, the salarians are warm-blooded amphibians with a hyperactive metabolism. Salarians think fast, talk fast, and move fast. To salarians, other species seem sluggish and dull-witted. Unfortunately, their metabolic speed leaves them with a relatively short life span; salarians over the age of 40 are a rarity.

The salarians were responsible for advancing the development of the primitive krogan species to use as soldiers during the Rachni Wars. They were also behind the creation of the genophage bioweapon the turians used to quell the Krogan Rebellions several centuries later.

Salarians are known for their observational capability and nonlinear thinking. This manifests as an aptitude for research and espionage. They are constantly experimenting and inventing, and it is generally accepted that they always know more than they're letting on.

Salarians are the oddball race of Mass Effect, being fast talking, fast moving and short-lived species with a knack for non-linear thinking and sciences. This manifests as an aptitude for research and espionage. They are constantly experimenting and inventing, and it is generally accepted that they always know more than they are letting on.

Salarians possess a very active metabolism, with extremely quick reflexes and a rapidity of thought that is considered to be superior to that of most other races, which also makes them consider the other races to be slow and dullwitted. Their metabolism means that it is extremely rare to meet a salarian that is over the age of 40 years. They often act as scientist or researchers for companies and governments, while their agile bodies and minds make them talented spies and investigators.

The salarians are a bipedal race of amphibian-analogues, with tall, elongated bodies. Their heads are long and thin, and have a pair of horns protruding from the top of their skulls. Salarian skin varies in color, but is mostly a shade of blue or grey. However, this does not apply to all salarians, as some are brightly colored, ranging from light red to green. Salarian eyes are large, oval and have thin membranes in place of eyelids. Salarians blink upwards, rather than downwards as humans do. The pupils are a wide slit, oriented horizontally, and iris colours - while normally not visible - include green, purple and brown.

Salarians have photographic memories and rarely forget a fact. They also possess a form of psychological ‘imprinting’, tending to defer to those they knew in their youth. Salarian hatching is a solemn ritual in which the clan Dalatrass (matriarch) isolates herself with the eggs. The young salarians psychologically imprint on her and tend to defer to her wishes.

On their first three interstellar colonies, the salarians planted settlements named Aegohr, Mannovai, and Jaëto. According to Kirrahe those settlements "remain at the heart of salarian territory to this day".

The salarians were the second species to discover the Citadel, only a few decades after the asari. They opened diplomatic relations at once and became one of the founding species of the Citadel Council. In a gesture of trust, the salarians opened the records of one of their intelligence services, the League of One, but this quickly created problems when the League's members found themselves in danger as a result. The League slaughtered the entire Union inner cabinet, but were later hunted down, leaving only relics behind.

The salarians also played a significant role in the advancement of the krogan species. The salarians provided the krogan with advanced technology and a new, tranquil home planet (in order to manipulate the krogan into eradicating the rachni for the Council). The peaceful home planet and better technology put less strain on the krogan as a species; they no longer had to worry about simply surviving on a dangerous planet with primitive technology, as they did before contact with the salarians. This new life, combined with their exceedingly high birth rate, gave the krogan the numbers needed to spread through Citadel space, aggressively claiming formerly allied planets as their own. In order to end these "Krogan Rebellions" the salarians then provided the turians with the genophage, a biological weapon that effectively sterilized the krogan resulting in almost all krogan pregnancies ending in stillbirth.