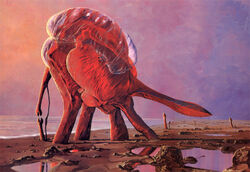 Sac-Backs live along the "shore", or edge, of the sprawling Amoebic Sea. This periphery is a bleak and inhospitable region, and as the margins of the massive "sea" colony recedes, it has left a flattened landscape, which at one time may have been considered the Amoebic Sea's "floor". It is within these featureless wastes that one may find the Sac-Back, roaming upon awkward, tripodal gait.

The species get their name from the sac that adorns the male's back. Their kind shows significant sexual dimorphism, with this physical feature only being the tip of the iceberg. This sac is used to store predigested food from the Amoebic Sea, which it later will feed to a group of females who live in a group called a harem. While the male lives on the surface and walks on their three legs, females instead dig "tombs" in which they will bury themselves, with only their mouth and tentacle seeing the light of day afterwards. The males will then travel between one harem to the next, and at each he will stop and either share his sack-stored food with inert mates through the proboscis that sticks above the terrain or mate with them. This mating is considered one of the more bizarre procreation rituals on the entire planet.