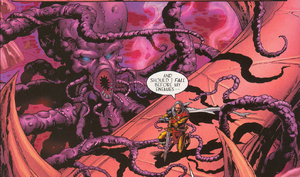 The S'thg'r is a creature from a world in the Negation Universe in CrossGen Comics.

The S'thg'r is a molluscan creature that resembles a terrestrial octopus, save that it is more monstrous in appearance, and is capable of traveling on land. It is a predator that is able to lure victims using false mental images to disguise itself as a lost love one whilst its tentacles entrap it.

Retrieved from "https://aliens.fandom.com/wiki/S%27thg%27r?oldid=173070"
Community content is available under CC-BY-SA unless otherwise noted.