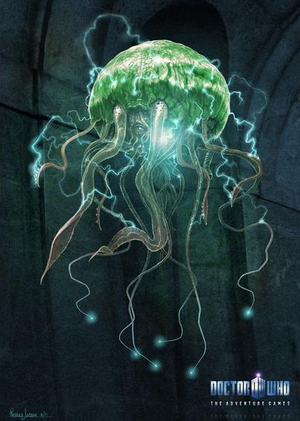 A few feet in diameter

Doctor Who
The Rutans (a.k.a. "Rutan Host") are a technologically advanced gelatinous species, perhaps most well-known for being part of the Rutan-Sontaran War which has lasted for millennia.

In their usual state, Rutans are large green spheres with tentacles, giving them a superficially jellyfish-like appearance. Their body is a few feet in diameter.

Rutans trained in 'special metamorphosis techniques' have the ability to take the form of any creature they desire. All Rutans can also generate lethal bioelectrical shocks, likely indicating the presence of electroplaques. Despite having no visible mouth, they can speak.

They seem to absorb electrical energy for sustenance.

The Rutans have been a spacefaring civilization for at least 150 million years, as far back as the Millennium War; an epic war in which a coalition of advanced civilizations including the Time Lords, Osirans, Rutan Host, and Sontarans waged an epic war against the Constructors of Destiny, in which they deployed a 1000 fleets against that enemy.

At one time the Rutan Empire controlled all of the galaxy known to the Time Lords as "Muller's Spiral", which is called the "Milky Way" by the inhabitants of Earth. Due to the war with the Sontarans, that is no longer the case as the two imperialistic powers wage a war for control of the galaxy.

The Rutans are currently at war with the Sontaran Empire, in a conflict which has been going on for fifty thousand years. By the start of the 20th century, the Rutans were losing and had been driven to the fringes of the galaxy as they were forced to make strategic withdrawals to fortified strongholds ("Horror of Fang Rock"). The tide had turned by the beginning of the 21st century as the Rutan Host was now winning ("The Poison Sky").

It is a war that never ends, despite the Sontaran Empire only lasting another ten thousand years. Which might suggest that Rutan Host wins the war, as the Sontarans would never surrender, even if they were almost wiped out. The The Doctor himself in the late 20th century said that he would 'place [his] bets on the Rutans'.

Retrieved from "https://aliens.fandom.com/wiki/Rutan?oldid=180201"
Community content is available under CC-BY-SA unless otherwise noted.