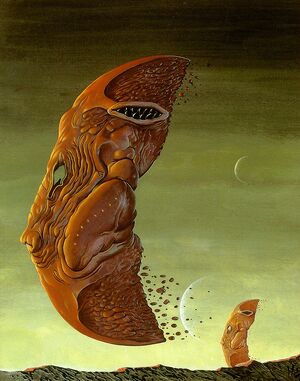 Expedition
Rugose Floaters are heavily wrinkled, Ocean Sunfish-like inhabitants of Darwin IV that float in the air. They feed on Aerophytes and Microflyers. During spawning season, they trail eggs behind their "fins" by filaments and reduce their crescent shape when spawning is complete. When threatened, they release a cloud of particles from their black eye-like appendages to fragment its sonar image, but this doesn't stop Skewers from attacking them. The Skewers do not feed on the Floater, but merely pierce its methane-filled bags, causing the Floater to fall to its death for sport.

Retrieved from "https://aliens.fandom.com/wiki/Rugose_Floater?oldid=181676"
Community content is available under CC-BY-SA unless otherwise noted.