The Roondaslock is a spherical predator with vision all around it. 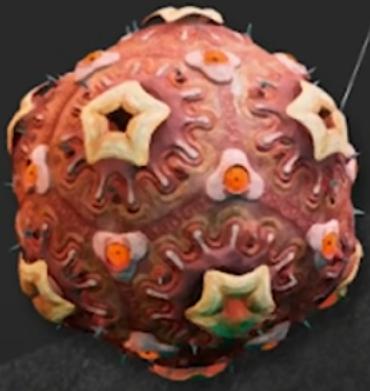 The Roondaslock is a spherical creature with eyes on all sides of its body, giving it 360-degree vision. Its many mouths allow it to use its long, barbed tongue both as a weapon, striking at nearby prey, and as a means of propulsion. Despite its apparent clumsiness, this creature is a dangerous predator. They will occasionally hunt in groups.

When killed, the Roondaslock drops a tongue bag from the middle of its corpse, which allows Trebhum who eat it to get the Tongued Trunk mutation, allowing them to shoot a tongue out their trunk which can hit objects and enemies.

The Roondaslock is very clumsy as it easily wanders into chasms filled with Toxic Fumes. Also, in the trailer they are teased to be able to survive in the habitat infected by the Servants of the Eternal Cylinder. When they are threatened, their eyes will glow red and they will use their tongue to launch themselves across the ground, squishing any unfortunate creatures lingering in their landing zone.