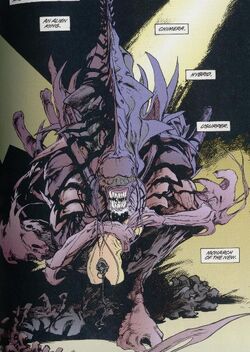 Alien
The Rogue Xenomorph is an alien created by Rogue, a mad scientist. It's also been referred to as a "King": a male designed as a weapon to rival the Queen caste, and thus help rid Earth of its alien infestation. The Rogue escaped and wreaked havoc until it was torn apart by a Queen.

Ernst Kleist, the scientist who engineered it, is shocked to find the Queen is in fact the superior specimen: The Rogue is larger and stronger, but the Queen's superior speed and intellect enable her to easily dodge the Rogue's brutish attacks, while she slowly wears it down and finally slaughters it (Kleist is subsequently killed when he uses a sound cannon on the Queen until it goes critical, destroying the asteroid base he is on).

Interestingly, the Rogue appears to have been engineered to ignore Humans. When exposed to one, the Rogue examined him closely, but did not attack, and finally it ignored him completely. This may be due to the Rogue caste not having as strong a sense to use Humans to breed as the Queen caste. Or maybe its simply because the Human prisoner was un-armed and restrained so posed no threat. The Rogue's recklessness is also shown when it destroys the barrier that separates the Alien sector and the Human sector, allowing alien drones to pour into the Human sector.