Hermaphrodite
Capable of impregnating other species by direct egg transfer

Seth MacFarlane
Roger's Species is an unnamed race of spacefaring aliens native to a frigid ice planet that is filled with large Wal-Mart-like megastores.

Members of this species appear like typical Greys, with short stature, proportionally large heads, hairless grey skin and bulging eyes. Their legs are extremely short, and their arms are long and thin, ending in four-fingered hands, in a similar manner to the Asogians.

They are hermaphrodites, and capable of impregnating other species by transferring eggs to them via mouth contact. Their skin is fireproof, and it's been claimed that they have no bones in their arms, which make them highly flexible. An ooze-like substance known as xenoplasm is expelled from their bodies every seven hours. Some of their inner organs, such as the pancreas, can be accessed by pocket-like flaps on their skin, and safely removed from their bodies, after which the organ will behave as a vicious creature with a mind of its own (indicating that it might be a symbiotic organism, rather than an actual organ). They have described themselves as being made 60% out of electricity due to their alkaline and manganese oxide composition, and are capable of emitting electrical discharges that can be powerful enough to kill and revive other creatures.

Perhaps most peculiar of all is that members of this species excrete heaps of gold and precious gems, something which is not considered valuable on their planet, naturally. To make it even odder, there seems to be some kind of supernatural curse regarding these excrements, as anyone who possesses them will have bad luck.

Their infamously self-centered behavior is actually a biological trait, as being nice is harmful for their metabolism.

This species was first discovered when its most well known member, Roger, crashed in Roswell, New Mexico in 1947. He traveled the world for a period disguised as different people up untill be captured by the CIA at sometime between the ~1995-2000 timeframe (based off various stories he's told). He was sent to area 51, where he attempted to escape. He was cornered by Stan Smith, but in in turn of events, ends up saving Stan's life. Stan offers to protect him from the CIA in return for saving his life. Ever since then he's lived with the Smiths, using their attic as his room/bar/etc. 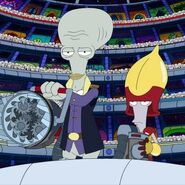 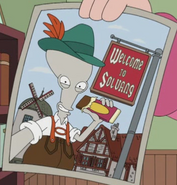