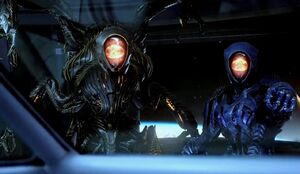 Able to learn Human languages to some extent

Presumably created by another race

The Robots are a mysterious species of sapient, robotic life forms from an alien star system.

Members of this species have no recognizable faces, but a series of lights on their visors. They're normally equipped with multiple limbs, but are capable of reconfigurating themselves into a more humanoid body plan. They've displayed extraordinary strength, as well as resilience and the ability to generate vast amounts of heat. They can be pulled back and regenerate themselves after their body parts have been separated or dismantled. In terms of speech, they have demonstrated the ability to learn Human languages, but only a few words and short sentences.

The most prominent member of this species is a mysterious robot of a ship that supposedly crashed on the same planet that several escape pods from colony ship the Resolute crashed on. The Robot was damaged, split in half, by the crash. However, it remained functional. It encountered Will Robinson and attempted to attack him, but was unable to, as its torso was impaled in a tree limb whilst its lower part was wandering below. Though initially hostile to Will, the two formed a friendship after Will reunited its halves in order to save it and himself from a forest fire. Later, it followed Will to his family's crash site where it used its power to free Judy Robinson, who was trapped in the ice. The Robot revealed little of itself, as it was unable to remember any previous recollection before meeting Will.

As the Robinsons met up with more survivors from the Jupiter ships, they decided to keep the Robot a secret. However, the Robot's existence was revealed to the rest of the colonists after it was called by Will to protect the encampment from two hostile predators. The colonists were wary of the entity, despite the reassurances from Will and his father. However, one colonist revealed that she recognized the machine to be the reason why the Resolute was evacuate, as it supposedly attacked the ship.

With no other choice, as its self-mandated mission was to protect Will, the Robot decided to commit suicide over a cliff to protect Will from itself. The Robot's remains were later scavenged by June Harris, a.k.a. Dr. Smith, who manipulated it to serve her, playing on its insecurities of being abandoned. Will's mother, Maureen Robinson, who had been kidnapped by Dr. Smith, was forced to investigate the machine's craft and discovered that the technology used for the Resolute's interstellar drive was eerily similar. She came to the realization that, years before the colony expedition, a celestial object known as the Christmas Star crashed on Earth, and pieced together that the object was actually a ship. She postulated that, after the Christmas Star's impact threatened the planet, the Human governments stole the ship's technology to build the Resolute to preserve its species. The Robot's attack on the colonists was not unprovoked, as it was merely sent to recover its creator's stolen property. 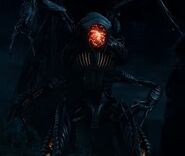 Retrieved from "https://aliens.fandom.com/wiki/Robot_(Lost_in_Space,_2018)?oldid=183682"
Community content is available under CC-BY-SA unless otherwise noted.