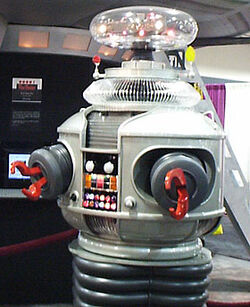 Clandestine saboteur Dr. Zachary Smith reprogrammed the Robot to disable certain circuits inside the ship, but Smith himself ended up trapped aboard and his own extra weight resulted in the ship being deviated from its course, after which it was mysteriously transported to an unknown location of space, resulting in the entire crew (Smith and the Robot included) being lost.

Over the course of the next three years, the Robot proved to be extraordinarily useful to the space castaways, and developed a personality of his own, being known for his loyalty, diligence, and occasionally his dry-witted remarks. Initially viewed as just a machine, he ended up developing a deep bond and friendship with the others, especially Will Robinson and Dr. Smith, although the latter would only rarely admit it, and enjoyed hurling insults at his "bubble-headed" mechanical companion.

The Robot, although describing himself as bound to his programming (which, according to him, differentiates him from the alien Robotoid, who has free-will), has repeatedly proven to have real sapience and self-awareness, and soon developed his own personality and interests, even including artistic ones, such as music (he can play the guitar and sing) and participating in Will's theater play. Unlike many robots, he has demonstrated all kinds of feelings, from sadness to jolliness, and in some cases even fear; although one feeling he rarely displays is anger. He can be very protective of his Human friends.

In terms of physical capabilities, he is incredibly versatile and seems to have been upgraded over the course of the Jupiter 2's voyages. By the third year after the ship became adrift, the Robot has demonstrated the ability to materialize objects, to separate his upper and lower halves and keep both of them functioning (although he claims that could result in his personality splitting as well), to translate alien languages, and to display an extensive knowledge of alien cultures and even galactic law. He is superhumanly strong and can knock out people with ease. His primary attack is to release energy discharges from his claw-like hands, and his primary functions include making use of environmental sensors as well as computing data.

The Robot's primary weakness consists of a small power pack mechanism on the side of his body which can be easily removed and deactivates him instantly; although he will be reactivated immediately once it's reattached. Pouring alcohol into his memory circuits will cause a reaction similar to Human inebriation (i.e., he becomes "drunk").

The Robot demonstrates his energy powers.
Add a photo to this gallery

Retrieved from "https://aliens.fandom.com/wiki/Robot_(Lost_in_Space)?oldid=183680"
Community content is available under CC-BY-SA unless otherwise noted.