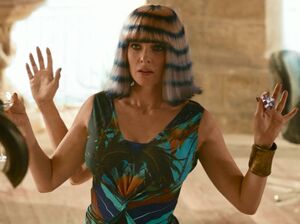 The Merchant of Death
The Mother of Murder

Rebecca Ferguson
Riza Stavros is an extraterrestrial arms dealer belonging to an unidentified species, which has a hidden third arm on her back.

She operates secretly on Earth, in an island off the coast of Naples that is known as "Riza's Fortified Fortress of For Sure Death". She likes to collect exotic pets and was previously involved in a relationship with MiB Agent H.

Riza is infamous among Earth's extraterrestrial community as a ruthless and thoroughly feared criminal, who's known by aliases such as "the Merchant of Death" and "the Mother of Murder". She has a Terrantian bodyguard named Luca Brasi. Her sellers include aliens such as Bassam.

Retrieved from "https://aliens.fandom.com/wiki/Riza_Stavros?oldid=180430"
Community content is available under CC-BY-SA unless otherwise noted.