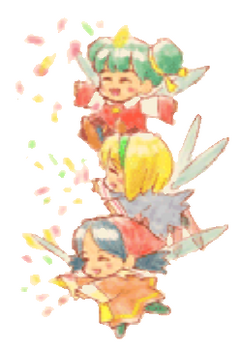 Ripple Fairies are a species of sapient winged humanoids from the planet Ripple Star, which, unlike most planets, is shaped like a heart.

Ripple Fairies have a humanoid form, and two wings sprout from their backs, enabling them to fly. Their hair is differently colored.

Ribbon is a notable member of this species. Her outfit is a red dress/long shirt that has long sleeves with white cuffs, and incorporates a white collar. She also has white trousers and brown and beige shoes. Ribbon has messy pink hair that contains a ribbon.

Ribbon is usually carefree, but she becomes devastated after Dark Matter invades Ripple Star, prompting her to rescue it. She gains Kirby's help in the process.

The Ripple Star Queen is the leader of Ripple Star Fairies. Her position is rather ironic; she seems scatterbrained, but she still possesses good diplomatic potential. The Queen has black hair in two pigtails (which have pink bows), a golden crown on top of her head, glasses (meaning she is physically short-sighted) and a white kimono and pink skirt.

Retrieved from "https://aliens.fandom.com/wiki/Ripple_Fairy?oldid=174515"
Community content is available under CC-BY-SA unless otherwise noted.