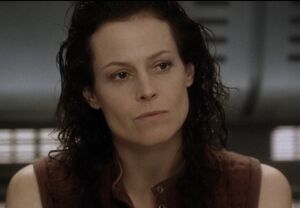 Ripley 8 is the eighth clone of Lieutenant Ellen Ripley, produced 200 years after her death in an attempt to successfully gain access to the Xenomorph Queen chestburster that had infested her.

Being a successful clone of Ellen Ripley, Ripley 8 shares many physical similarities with her template.

Because of the crossed DNA between host and parasite, Ripley 8 possesses a connection to the Xenomorph's hive mind, superhuman levels of strength and durability, and blood with acidic properties.

A side-effect of the hybridization caused by her creation, Ripley 8 has an aggressive personality.

Retrieved from "https://aliens.fandom.com/wiki/Ripley_8?oldid=198880"
Community content is available under CC-BY-SA unless otherwise noted.