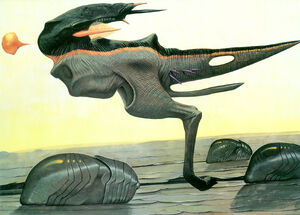 Expedition
The Rimerunner is a one-legged animal from the polar regions of Darwin IV . Supported by only one leg, the Rimerunner hops across its Arctic home like a kangaroo. It eats only aerophytes and other microscopic airborne organisms. At the front of its head, the Rimerunner sports an umbrella-like organ. This organ, suspended by thin neural cables, is a sophisticated sonar system along with a simple and atrophying eye.
Community content is available under CC-BY-SA unless otherwise noted.
Advertisement