Alien Species
Register
Don't have an account?
Sign In
Advertisement
in: The Simpsons Universe, Predators, Sapient Species,
and 13 more 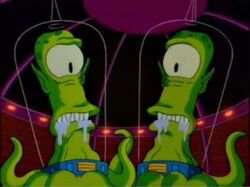 The Rigellians are tentacled cycloptic aliens from the planet Rigel VII.

Rigellians are physically large creatures, standing about 2.1 meters in height. Their skin is light-green in coloration. They appear like land-based cephalopods, with their bodies consisting of a large head and a mass of tentacles for locomotion. Two of the tentacles are much longer than the remaining ones, and are commonly used as their main manipulative appendages. The head is elongated and contains a large mouth filled with sharp teeth and in a state of perpetual drooling. They have a single, gigantic eye, with a vertical slit pupil and white sclera, and also have long pointed ears.

Rigellians often wear transparent space helmets, but no other protection, and have been shown to survive just as well on Earth without the helmets. Despite being a dioecious species, the females appear to be indistinguishable from males, speak in male-sounding voices and even have testicles. They secrete what they describe as "ocular fluids" from their eyes on emotional situations, much like Humans secrete tears; but are also known to vomit from their eyes, which seems to be indistinguishable from shedding tears. They hold hands to exchange long protein strings.

Rigellians are a spacefaring civilization and known to travel to other planets in saucer-shaped spacecraft and in some cases abduct other beings and attempt to take over their worlds. In other instances, however, they are often there simply to observe and gather information, and in at least one case attempted no hostile act whatsoever, and merely wished to prepare dinner for Humans. By a phenomenal coincidence, the Rigellian language is identical to English. At least some members of this species are known to practice the religion known as Quantum Presbyterianism.