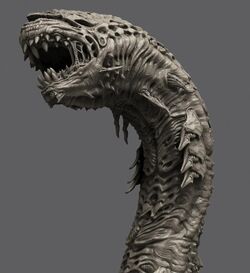 Gears of War
Riftworm is a alien species of massive creatures that create burrows by tunneling its way beneath the surface. It is described as semi intelligent and considered as a "god" to the locusts themselves. They normally devour everything in their path and its waste can produce life within the hollow and also have living parasitic organisms inside of them called Nemacytes.