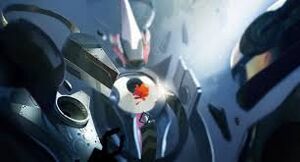 The Riftborn are an orthogonal race at dwelled in a pristine, geometrical universe. The Riftborn were creatures beyond the scope of the denizens of the Endless Space Universe, capable of time-shifting. They were basically living abstract, timeless existences. The Riftborn who explore the Endless Universe are sheathed in quasi-robotic forms.

The Riftborn originally dwelled in a realm outside of the universe living content and peaceful existences in a well ordered universe. However disaster struck when an event known as the Rift, rupture the space-time continuum. The chaos seeping from the contemporary universe infected many of the Riftborn, corrupting them. To prevent the spread of infection the infected Riftborn took the last available course of action, crossing into the Endless universe. There they became exiles and outcasts to many of the civilizations of the galaxy.

Hailing from an alternative dimension where the laws of physics are vastly different, the Riftborn are able to sculpt "time bubbles" that stretch over entire star systems. They are able to adjust the flow of time in these bubbles in myriad different ways for all those inside. Though exiled to a new strange dimension, they are still able to contact their home realm of Coroz.

The Riftborn or at least the ones in the galaxy are composed of a mixture of the race's most capable thinkers, engineers, and fighters. On their adopted homeworld Vanguard they are organized in what might be recognized as a semi-military structure. Unlike Coroz, where Riftborn life revolves around serenity, contemplation, and the higher arts. The Riftborn in the Endless universe strive to contribute to the effort to understand and eradicate their disease.

Retrieved from "https://aliens.fandom.com/wiki/Riftborn?oldid=168830"
Community content is available under CC-BY-SA unless otherwise noted.