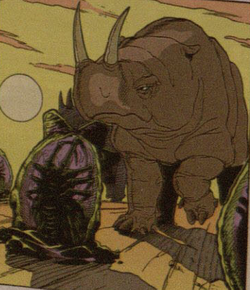 Alien vs. Predator
Rhynth are large cattle-like quadrupedal ungulates that bear a striking resemblance to the rhinos of Earth. They are native to the desert planet Ryushi, and for centuries were used as hosts for the Xenomorphs transported there for the Yautja's hunt, are hunted directly by the Yautja, and have recently been domesticated by Human ranchers so that their meat could be sold back to Earth.

These large herbivores look strikingly similar to Earth rhinos, save for their two horns being side by side, not one in front of the other, and that they also have a long, thick tail. They have a large skeleton and a thick tan-colored hide that can be made into leather, and this hide can be either uniform in coloration or covered in large splotches, like that of an Earth cow, though they are purple in coloration. They appear to lack hair, though it is possible that it is only sparse, seeing as they are native to an extremely arid world.

It is noticeable that all Rhynth have similar sized horns, which may indicate that they are used for protection against such predators like Briar Wolves instead of for competing with one another, especially since young ones also have well developed horns. It should also be noticed that Rhynth usually have either a spotted hide or a plain one, and that this may indicate different varieties or, more likely, gender.

Though this species may appear to be mammalian, seeing as they resemble rhinos and are raised like cows, it is possible that they are reptilian, as they display several aspects that are more often found in reptiles, such as their tails, though this is only speculation.

The Rhynth seem to be largely passive herbivores that move in herds. Not much else is known about their behavior but apparently they sleep standing up.

The Rhynth have been used in a variety of ways over the centuries by various different species.