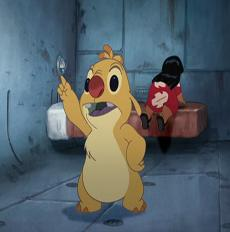 Rob Paulsen
Experiment 625, more commonly known now as "Reuben", has virtually the same abilities as his successor, however he does not display them. Like Houdini, his personality is virtually opposite among the other 600 series: he is basically lazy and cowardly, and is one of few who speaks English. He has a fascination with various sandwich recipes and is often referred to by his pod number (625) and acts as a wise cracking sidekick. He could be considered a failure due to his lazy attitude about everything and combined cowardice.
Community content is available under CC-BY-SA unless otherwise noted.
Advertisement