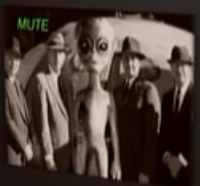 The Reticulans are an alien race of greys that on a parallel Earth befriended humanity and traded technology.

The history of Earth differs from the mainstream timeline as Adlai Stevenson became the 34th President of the United States. Under the Stevenson administration, American government offered transparency to its citizens and ushered in an era of trust between the populace and its elected representatives.

Therefore, when the Reticulans crash-landed in Roswell, New Mexico, the government told the people, and created the Reticulan-American Free Trade Agreement (RAFTA) was born, giving the United States access to futuristic technology.

The United States then began to experiment with Reticulan DNA to cure a myriad of Earth diseases though there were unexpected side-effects, resulting in some humans acquiring Reticulan traits. Those that were afflicted were deemed outcasts, forcing those like an individual called the Leader to form a an anti-government movement to expose the United States government of its atrocities.

Retrieved from "https://aliens.fandom.com/wiki/Reticulan_(Sliders)?oldid=138527"
Community content is available under CC-BY-SA unless otherwise noted.