"Reptilian" redirects here. For other races identified as such please go to Reptilian (Godzilla) and Reptilian (Lost Tapes).

"Draconian" redirects here. For other races identified as such please go to Draconian (Doctor Who) and Draconian (Marvel). 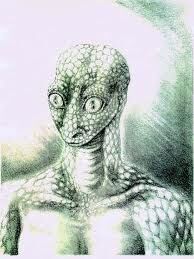 An artist's impression of a Reptoid.

Reptoids; a.k.a. Reptilians, Draconians, Saurians or Targzissians; are believed to be a sapient humanoid race of bipedal reptiles which live secretly on Earth, often infiltrated and disguised among Humans. Having figured in the mythology of numerous different cultures throughout history, they're still commonly reported in both cryptozoological and UFOlogical cases, and have been the subject of conspiracy theories and paranormal investigations for decades.

Currently, there exist numerous hypotheses about the potential origins of these creatures, ranging from extraterrestrial to extradimensional, to beings actually descendant from dinosaurs which survived the Cretaceous-Paleogene extinction event. Commonly-believed ideas include that these intelligent creatures are naturally underground dwellers, and still operate in the subterranean, but are also capable of infiltrating Human society by disguising themselves, possibly to prey upon Humans as a natural food source, or to control their political and sociological development by assuming the identities of important heads of state.

In UFOlogy, there are many different types of Reptoids, such as, but not limited to: Greys, Bellatricians, Saurians, and inter-dimentionals (Tiamatians). There is some conjecture that the Anunnaki also fall in this category.

Although some variation exists among the reports, these creatures are almost invariably described as Human-sized, lizard-like bipeds, all covered in scaly skin and often with a long tail. Their shapeshifting skills might represent either a natural camouflaging ability, a mental capacity to generate illusions, or a technological achievement. Like the majority of reptiles, they're often regarded as meat-eaters, and may have a preference for consuming Human flesh.

As stated above, there exists an advanced reptilian species that is said to live in underground bases on Earth. Some of the dwellings are considered to be highly advanced cities with huge monorail systems that connect to various points throughout the Earth, like the poles, and Mount Shasta. Their entry points are marked by the Ouroboros symbol that serves as a warning to all Humans to vacate the premises immediately.

The Reptoids who bare the Ouroboros symbol represent the reptilians who have colonized Venus, the Moon, Mars, and four moons of Jupiter and Saturn. These are the seven colonies represented by the Seven Stars wrapped by the encircling drakon of the Ouroboros.

Conspiracy theorists like David Icke claim that the Reptoids are conquerors who want to take over and either destroy or enslave other planets. He says that they are part of every royal bloodline and are part of the bloodline of every US president. In 1934, a man found two golden tablets under Los Angeles and was said to be part of the "serpent people", who planned on infiltrating the Human race and taking over the world.

The most ancient of ancients are the royal/elite line of Reptoid. They range from 7 to 10 feet tall and can weigh up to 1,800 pounds (~ 816 kg). Their appearance is what may have inspired dragons, demons and devils in mythology and folklore. Their current locations are likely subterranean, assuming that they're not extinct.

Grey's are on average 3 to 6 feet tall but some grow up to 8 feet tall. andnd can According to some sources, the Greys are also considered Reptoids[1] having reptilian DNA. The Anunnaki are known to have genetically modified the royal line of Greys, known as Zetas, with Human DNA to look more Human. These Greys were installed as Kings and Pharaohs, by the Anunnaki, throughout mankind's history.[2] The Greys who are inducted into the Orion program, otherwise known as Orion Greys, are under the direction of the Cabal, often engaged in abductions and experimentations.[3] The Greys, however, are originally known as Solipsi Rai[4] who are a benevolent and curious race,[5] when not indoctrinated.[6] They are thought to be more helpful in humanity's spiritual progression.[4]The relationships between Reptoids and Greys are very strained as the Reptoids, on their goal of conquering planets, have enslaved the Greys.

The Saurians have ties to Human history and have influenced Semitic script. They have been living amongst Humans since the beginning of their inception. Millions of years ago Saurians looked more crocodilian and had defensive tails. As they evolved, they became more Human-like, many having lost their tails, and some even developing hair follicles (mainly on the scalp). Their evolution has not only made them intelligently superior, but also telepathic. They are known to have brought civilization to humanity.

According to some researchers, the Reptoids which evolved on Earth in the Cretaceous period were not the original race, but were seeded by a far more advanced race of interdimentional reptile beings known as the Tiamatians.

Because of the apparent dislike for Anunnaki, it is suspected that the Saurians may have been the IGIGI that the Anunnaki enslaved for 2500 years. Thus it would seem likely that Sumerian culture was influenced by Saurian IGIGI ("watchers"), as represented in their reptilian artifacts.

The largest of the Reptoids they are anywhere from 14 to 22 feet tall whitch is really large compared to normal Reptoids who only range from 6 to 8 feet tall Some sources claim that the Draconians, a.k.a. "Dracos", represent the Saurians that left the Earth to colonize the Draco Constellation, eventually giving rise to the hostile Draconian Empire. They have also been known as the Cekahrr; also spelled Ciakar.

It has been claimed that these sinister creatures are literally sustained by the fear of the races they have subjugated, and that they particularly enjoy feeding on children. Additionally, they have been described as a hive-based society, with the warriors being ruled over by a seldom-seen elite caste which never leaves their capital world. This elite is sometimes depicted with wings, similar to the aforementioned Elders.

Like their ancestors, the Draconians typically operate from subterranean outposts, and are masters of conquering worlds by secret manipulation of figureheads.

Retrieved from "https://aliens.fandom.com/wiki/Reptoid?oldid=195336"
Community content is available under CC-BY-SA unless otherwise noted.