Alien Species
Register
Don't have an account?
Sign In
Advertisement
in: Masters of the Universe, Sapient Species, Non-Spacefaring Civilizations,
and 9 more 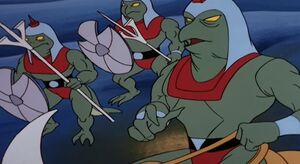 Masters of the Universe
Reptile Men, as their name indicates, are a sapient reptilian species from planet Eternia, and believed to be closely-related to the planet's more well-known Snake Men.

They physically resemble bipedal Human-sized lizards, and their reptilian skin comes in many different shades of green. They have beaked mouths, yellow eyes, clawed digits and long tails. Their hands have four digits, including an opposable thumb.

However, there seems to be a significant amount of variation across different individuals and groups regarding the anatomy of their hands, feet, eyes and heads. Some individuals possess webbed hands, which others lack. Some have three toes on their feet, while other groups have only two; and those who possess two-toed feet also display pointed ears and head crests that are not present in others.

Some features, such as the shape of their pupils and the color of their skin, have been shown to vary even in the same individual, suggesting that they have the ability to change from vertical-slit pupils to small round pupils; possibly depending on the light conditions; as well as change the color of their skin from green to brown. 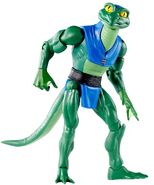