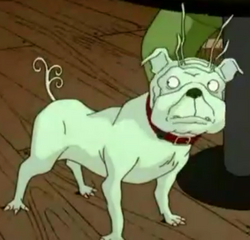 Men in Black
Remoolians are a race of sapient extraterrestrial beings whose appearance is similar to a pug dog, but with four short antennae on their heads and a three-pointed tail. At least one member of this species is known to live clandestinely on Earth, disguising himself as a normal pug.

Frank in his pug disguise.