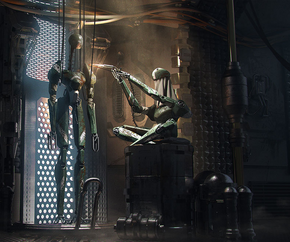 Endless Universe
The Remnant are a cybernetic race of assassins created by the Endless.

According to the lore, they are cybernetic organisms that resemble armored thin humanoid frames. They possess a digital quantum link that can connect their minds.

The Remnant were created to be killers for the Endless, however after the Endless wiped themselves to extinct through internecine war, the Remnant were left in hibernation awaiting new contracts and orders. Upon awakening one Remnant by the name of Belcus Akad-Talar became infected with Dust which enlightened him. Now seeking another path other than conflict, Belcus suppressed his kind's inherent programming to build a better future.

Originally an ancient order of assassins after Beleus Akad-Talar reprogrammed his kin only about a hundred to build a better galaxy for the most deserving race they encountered.

Retrieved from "https://aliens.fandom.com/wiki/Remnant_(Endless_Space)?oldid=116048"
Community content is available under CC-BY-SA unless otherwise noted.