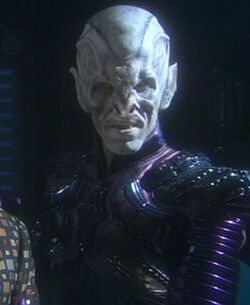 Dark side of the planet

Comparable to Humans, but seem to be taller on average.

Unknown; possibly endangered or extinct following the explosion of their sun

The Remans are a sapient species native to the tidally-locked planet Remus, located in the Romulan star system along with its twin planet Romulus. As a race they have been subjugated by the space-faring Romulans and treated as lower citizens of the Romulan Star Empire.

Remans are gaunt-looking hairless humanoids with pale skin, sunken eyes, pointed ears and sharp teeth. Having evolved in a tidally-locked world, they inhabit the dark side of Remus (as the temperatures on the bright side are too hot) and thus have a natural aversion towards bright lights. They're a physically powerful species, naturally fit for war and combat. They have also demonstrated psychic abilities that allow them to invade the minds of other beings from distance.

At some point after the rise of the Romulan race (who evolved from Vulcan settlers), the Remans were conquered by the Romulans and employed as a labour force to mine for dilithium, which exists in abundance on Remus. Being a warrior race, they were also employed as soldiers, including during the Dominion War.

Remans are treated as second-class citizens by their masters and, due in part to their sensitivity to light, are rarely seen aboard Romulan ships and seem to operate their own. Their language is described as a complex one, and they use pictographs to represent verb roots.

It's not known what happened to them after the Romulan sun exploded in 2387, destroying Romulus and presumably Remus as well.

Retrieved from "https://aliens.fandom.com/wiki/Reman?oldid=173919"
Community content is available under CC-BY-SA unless otherwise noted.