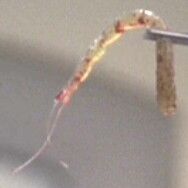 Small, similar to an Earth worm

Star Trek
Regulan Bloodworms (Regulani vermis) are small, parasitic worm-like organisms native to planet Regulus II, in the Regulan System. Their bodies are soft and spine-less and they have long thin tendrils protruding from the anterior portion of the body. The Bloodworms are used in medicine, at least by Dr. Phlox, who states that the creatures are quite useful for cleansing the host's lymphatic system.

Internal
Add a photo to this gallery

Retrieved from "https://aliens.fandom.com/wiki/Regulan_Bloodworm?oldid=164808"
Community content is available under CC-BY-SA unless otherwise noted.