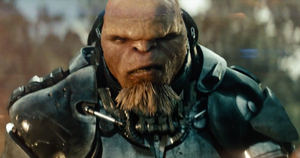 The Regents are a species of sapient, space-faring humanoids.

The Regents are a tall, mammalian species that appear humanoid. They are bipedal and wear dark armored suits with bronze-gold highlights on top of a skintight suit. They have four digits on each hand, minuscule ears, flat faces, a porcupine-like bristle on their chin and green gold-flecked eyes that are extremely sensitive to bright light. They also have two extra nostrils beneath their eyes.

Regents don't live on the surface of their home planet, but rather within its depths, in caves and buildings made from rock. However, they are able to venture out in the evening light.

Their armored suits are surmounted by airtight helmets pressurized with an unknown gas and an integrated identification friend-or-foe system that can detect enemies through red-green vision. The helmets also have extreme-sunglasses lenses to aid with seeing in the bright sunlight.

In 2005, a habitable exoplanet was discovered that Humans sent a message to, although no reply came through. In 2012, the aliens responded by flying to Earth in five ships, one crashing in Hong Kong, which was confirmed as a communications vehicle.

The Regents were a species that lived on an unidentified planet much like Earth, which Humans named "Planet-G", on which they spent most of their lives. However, their planet was attacked by another unspecified alien species. It's believed they were escaping the remains of their own planet and came across humanity's signal. They may have been looking for safe refuge and trying to establish contact with other surviving members of their species. The used vehicles were not designed for war, but mining, as the Regents do not live in a culture based on war. Their apparent hostility was most likely due to the fact that Humans attacked them first.

Upon landing in the Pacific, the Regent's mother ship created a force field that blocked all naval ships from entering, as well as trapping the few destroyers that happened to be inside the large sphere of electromagnetic energy, which encapsulated most of Hawaii. After the Navy attacked the three alien assault ships, they responded by shooting peg-shaped mining explosives which they used as weapons, they would explode shortly after contact with their target. The destroyer's air defense systems were not able to destroy the alien mining explosives before they hit, which resulted in the destruction of the USS John Paul Jones, the USS Sampson, and the Myōkō; a Japanese missile destroyer.

The Regents then attacked Hawaii with strange, spherical machines called "Shredders" that tore through a military base, highway roads, buildings and nearly killed a boy playing baseball. Seemingly, these machines had some level of autonomy, as they were able to chase Humans, and were revealed to have a similar friend-or-foe identification system as the Regents' helmets.

The aliens then went to Oahu and used the satellite communications to send messages to their home world. However, upon using the retired warship USS Missouri, the Humans successfully sidetracked the alien ships and destroyed all, including the mother ship. They also sent a warhead that destroyed the remaining aliens, which were out of their ship, in the Oahu observatory.

It is believed that they may have survived or have returned to Earth, as a group of schoolboys and a handyman in Scotland later discovered a strange object. Apparently excited to see inside, the handyman managed to open the ship, but before they could look inside, one of the Regents' hands emerged, making the boys and handyman run screaming.

Retrieved from "https://aliens.fandom.com/wiki/Regent_(Battleship)?oldid=174164"
Community content is available under CC-BY-SA unless otherwise noted.