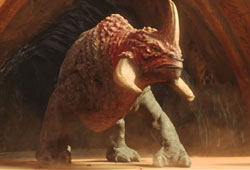 Herbivorous (Carnivorous when forced to eat meat in show of aggression)

The Reek was a large thick-skinned, horned, bovine-like quadruped, native to Ylesia. The species was exported across the galaxy to many different planetary systems, forcing subspecies to evolve. Subspecies could be found on Iridonia and Ithor. They could also be found in ranches on the Codian Moon, Tatooine, and Saleucami.

Reek are extremely territorial, brutally fending off any threat. They, along with Acklays, are often found in Arenas throughout the Outer Rim, most notably on Geonosis.

Reek are herbivoures by nature, but are sometimes forced to eat meat for show and to make them appear more vicious.

A Reek is one of the three creatures to appear in the arena in Geonosis, along with an Acklay and Nexu in Star Wars episode 2 attack of the clones. It is originally sent to attack Anakin but he manages to gain to control of the Reek and get it to kill the Nexu that was attacking Padme. The reek is later killed by Jango Fett.

During the Clone Wars, the Kaleesh cyborg, General Grievous mounted one of his creatures.

Retrieved from "https://aliens.fandom.com/wiki/Reek?oldid=169134"
Community content is available under CC-BY-SA unless otherwise noted.