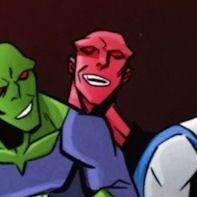 DC
The Red Martians are one of three sapient species from the Red Planet, in most respects they seem identical to the Green Martians.

Not much is known about the culture of the Reds, but they live underground with the other races and they along with the greens as a whole seem to consider the White Martians inferior.

Not much is known about the Red Martians, as they only appeared in one issue of the Young Justice comics. Comments by the creator of the series reveal a few details about them that haven't been confirmed in published material as of yet. They are apparently considered royalty and can produce viable offspring with the other races of Mars.