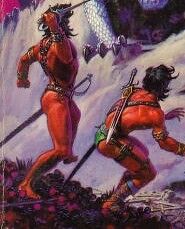 Barsoom (known to the humans as "Mars")

Edgar Rice Burroughs
The Red Martians are the predominant race on Barsoom.

According to the most widely-accepted histories, the Red Martian race is the result of centuries of interbreeding between the fair-skinned Orovar, the black-skinned First Born, and the yellow-skinned Okar. According to this history, when the oceans of the world began to dry out, the three ancestral nations formed an alliance in the hopes of preserving sentient life on Mars. The three nations began to interbreed, and over time, the characteristics of each individual nation became diluted. After countless generations, copper skin and black hair became the new norm, and thus the Red Martians were born. They thrived and spread out over the surface of the planet.

Like the other martian races, red martians wear very little clothing, but a lot of ornaments. Body and facial hair was practically unknown, and considered very unusual.

With the Red Martian people spread out over the face of Barsoom, Red Martian culture is far more diverse than the largely-homogenized cultures of the other races.

Traditionally, most Red Martians worshipped the goddess Issus, and when the individual reached the age of 1000 years, or grew tired of living, they would make a pilgrimage to the Valley Dor, near the southern pole of Barsoom. The valley was long believed to be the entrance to a glorious, idyllic afterlife. These beliefs had been drummed into them by the Therns. In truth, the valley, while abundant with life, was overrun with predatory white apes and plant men. The few who survived those beasts ended up becoming enslaved by the Therns until they grew too weak to serve, at which point they were killed and consumed.

In the 2012 film John Carter, the Red Martians are portrayed more modestly. They also mark themselves with bright red tattoos that represent social standing and key life experiences.

In the Dynamite Comics series the Red Martians are portrayed with a fair amount of accuracy to their counterparts in the original novels. On occasion there will be members of the race with facial hair.

In the Marvel Comics series Warlord of Mars, the Red Martians are more literally red-skinned, and have facial hair on occasion. Additionally, Zodangans in this version have pointed ears.

Retrieved from "https://aliens.fandom.com/wiki/Red_Martian?oldid=199714"
Community content is available under CC-BY-SA unless otherwise noted.