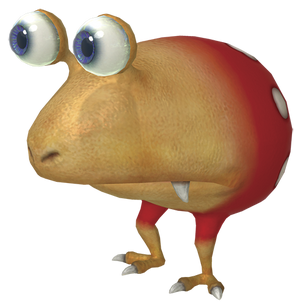 The Red Bulborb, also known as the Greater Grub-Dog, is the most common known species of Grub-Dog discovered on PNF-404. Upon discovery, it was originally referred to as the Spotted Bulborb, named for the spotted like pattern on its back, but was renamed after more Bulborb species were discovered with similar patterns to avoid species confusion in study.

The Red Bulborb was the first of its family to be discovered, and as such became the group's namesake. Red Bulborbs are (in theory) descendants of amphibious creatures, their legs often used for fast bursts of speed in an ambush attack after prey. Their mouths, like other Bulborbs, have sabre teeth which after some careful study turn out to be insect-like mandibles. These mandibles are used to crush the exoskeletons of its prey, but also used to dig up roots.

Red Bulborbs are nocturnal hunters, with large pupils and large lenses to better absorb light during nightfall. During the day, these large creatures are sluggish and fall asleep, their eyes slightly sensitive to the daylight. They have been seen hunting during the daytime however, yet this isn't really as common in most Red Bulborbs as they would mainly only hunt during daytime if especially hungry, or if disturbed from their nests.

While most Red Bulborbs only grow up to 90 millimeters (which is fairly big for PNF-404 species), there had been reports of a "subspecies" of Red Bulborb, though these are specifically rarer than the common Red Bulborb. These giant variants grow to the size similar to an Emperor Bulblax, with their eye stalks and snouts notably shorter possibly due to the size, and their "sabre teeth" further towards the center of the jaw rather than near the back.

Their behavior is notably different from usual Red Bulborbs as well. Given their larger size, they spend more time during the day hunting than at night, as they require more food to consume.

Juvenile Red Bulborbs seem to be a preferred target for the parasitic Bulbmin. This subspecies is notably smaller than normal Red Bulborbs and have similar behavioral features to a Pikmin. Their biggest difference is that they have a stem growing from their backs, possibly thanks to the Pikmin controlling it.

Bulbmin adults behave similarly to normal Bulborbs despite their size, but juvenile Bulbmin constantly mimic the adults and stay within groups until they mature.

Retrieved from "https://aliens.fandom.com/wiki/Red_Bulborb?oldid=169609"
Community content is available under CC-BY-SA unless otherwise noted.