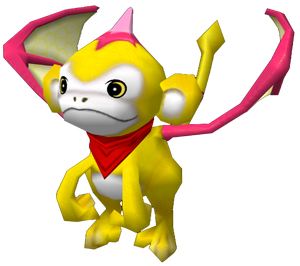 A Recky is an avian species of Egg Animal, appearing as a hybrid between a monkey and a bat. Like Clippens, a subspecies of Recky exists known as the "Super Recky".

Reckies look similar to a monkey with yellow fur and white skin. They also have pink bat wings coming out of their shoulders to give them flight, and a long pink-striped tail. It has a single pink horn on top of its head.

Super Reckies are a rarer, yet more powerful subspecies to the more common Recky. Their skin is slightly reflective, and their colors shift from purple, to red, to orange, and to white at the end of their limbs.

They fly much faster than normal Reckies, and as such attack quicker.

Retrieved from "https://aliens.fandom.com/wiki/Recky?oldid=181854"
Community content is available under CC-BY-SA unless otherwise noted.