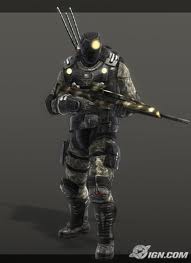 The Reborn (sometimes referred to as the Militia) are augmented supersoldiers developed by the US Government in order to avoid a military draft, which already has cost the Government for its controversy. They rebelled against the Government and have taken control of Area 51, releasing swarms of Xenos that were contained within the base.

The Reborn are US Soldiers considered MIA by the Army. Soldiers aren't the only people used, however. Prisoners of war, convicted criminals, illegal immigrants, and homeless people are also taken into its ranks. The homeless subjects were the first to be tested with new augmentations, which were developed using alien technology. If they survived, the experiments were taken to the next level. It is hinted that some of them ended up as parts of the Reborn Project by means of extraordinary rendition and kidnapping, particularly the homeless and criminal subjects.

The appearance and level of augmentation of the two variants are drastically different. However, they all share the same basic characteristics; they are all bipedal humanoids with a large amount of cybernetic implants. When compared to normal Humans, they appear to have more of a grayish skin tone.

Despite being highly disciplined and augmented, it seems that they've still got their individual personalities; they can often be heard shouting obscenities at the player and other soldiers, and some still retain their native accents.

Many members of the Militia feel betrayed and have a deep-seated hatred of the US Government and the military, Delta Force in particular.

The Reborn displays a highly adaptive range of combat tactics, though many do not involve subtlety. They show no mercy to captured soldiers and will often resort to high levels of violence.

Reborn Soldier- Standard footsoldiers of the Militia. They are about as tall as a standard human. They can be found carrying a wide range of weapons. They seem to have received a number of implants to their face and body.

Reborn Scout- Scouts are noticeably taller than soldiers, and have received a larger amount of implants. In fact, half of their body is a machine; only the face, torso, and arms have not been replaced. If their legs are damaged enough, the scout's upper body will detach and crawl towards enemies.

The Reborn themselves are composed of technological implants created using alien technology. These may serve a number of purposes from increased speed, strength and durability to sensory acuity or possibly a built in intercom system that allows them to communicate.

Reborn weaponry is advanced but basic. Soldiers make use of plasma rifles, energy shotguns and assault rifles. The primary weapon of the scouts are two large guns mounted on their shoulders. If detached from their legs, a scout's torso will go on a vengeful dash-crawl towards whoever shot its legs off. If it reaches its target, or takes further damage, it will detonate in a white-hot EMP blast.

Due to their being based out of Area 51, the Reborn are in possession of several different types of vehicles. It is known that they released the Xenos by using an alien ship to blow a hole in the base dome. On several occasions, the Reborn are seen using standard military helicopters to pursue their enemies through an area.

Retrieved from "https://aliens.fandom.com/wiki/Reborn?oldid=166510"
Community content is available under CC-BY-SA unless otherwise noted.