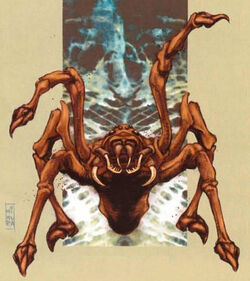 Rearing Spiders, also known as Giant Cave Spiders, were a large arachnoid species indigenous to the forest moon of Endor. Their name comes from their way of intimidating and attacking foes by lifting its anterior half into the air to encompss pray with all of its legs. They could be compared to huntsman spiders, and would hunt their prey instead of capturing them in webbing. They were found in desert caves or scavenging the rotten meat left by a Gorax.

Retrieved from "https://aliens.fandom.com/wiki/Rearing_Spider?oldid=187997"
Community content is available under CC-BY-SA unless otherwise noted.