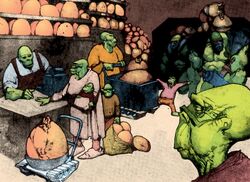 Alien
Reapers are a sapient alien species of humanoids with green hairless skin, blank eyes, sharp fangs and long tongues. Their most notable feature is that they're somehow able to eat live facehuggers and consider them a delicacy, suffering no ill effects from the creature's extremely corrosive body fluids. They will even risk their own lives to collect eggs and sell them in their markets.