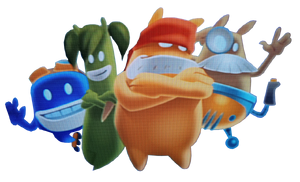 De Blob
The Raydians are a simple race of Humanoid beings that inhabit, and dominate the planet Raydia.

Raydians are semi-humanoid in appearance, with no visible separation between their bodies and heads, giving them a simplistic circular shape to their bodies. They have small stubby legs, with stubby arms ending in three-digit hands. They have a pair of antennae on top of their heads, White eyes, and wide mouths.

All Raydians are very colorful, and can appear as any known coloration, but can only have just one basic color and not multiple at a time.

Raydians are, in summery, a peaceful and fun-loving race. Many activities they do is often with fun in mind, be it sports, games, or anything else in their lives. They also have a deep fondness for colors, as many structures built by them are very vibrant in coloration.

On early studies, their technology seemed on par with Humans during the 2000s: Cars, boats, computers, tall buildings, and so on being a common thing at the time. Later studies though shown that they developed vehicles capable of flight, such as flying buses.

Retrieved from "https://aliens.fandom.com/wiki/Raydian?oldid=168827"
Community content is available under CC-BY-SA unless otherwise noted.