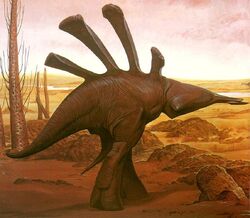 Raybacks occupy a slightly different ecological niche on Darwin IV than their rival predators, the Arrowtongues. Being smaller than their rival, they are also faster and more agile, allowing them to not only outsprint their larger rivals but also tackle prey such as low-feeding fliers, young herd animals, or even ambush Gyrosprinters.

They are quite aggressive, and their unpleasant temperament will lead them to fiercely attack anything that moves, especially if startled suddenly. Its only weaponry however is its lightning-fast speed and dagger-like tongue, although these are certainly a deadly combination.

The Rayback is a bipadalien (it has two legs) with a roughly dinosaur-shaped body. Its tail is somewhat like that of a dinosaur's, and it has a prominent phallus. Like almost all animals on Darwin IV, it has no eyes. Its wedge-shaped head is equipped with a sonar mechanism for detecting its surroundings, however, and it also has a powerful dagger-like proboscis. Also it has a long line of red biolights along its back. Its most distinguishable feature is the four tall spines that protrude from its back, from which its name derives. They bear the general appearance of both an Arrowtongue and a Bolt-Tongue, although whether this is due to a close genetic relationship or due to their similar predatory niches is up for debate. Like all Darwinian carnivores, it is a liquivore, feeding by inserting its dagger-like tongue into its victim, pumping in digestive fluids that dissolve the victim's internal organs, and then sucking out the fluid. However, it is preyed upon by Eosapiens.

Behind the Scenes Edit

Retrieved from "https://aliens.fandom.com/wiki/Rayback?oldid=180112"
Community content is available under CC-BY-SA unless otherwise noted.