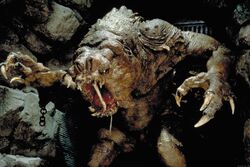 Star Wars
Rancors are tall, carnivorous reptomammals which originated on the planet of Dathomir. It is stated that those from Dathomir are actually stronger and more intelligent than others, such as those found on Ottethan, Corulag, and Lehon, where they were brought by crashed starships. Tall beasts with great power, they possess a skin tough enough that can withstand blaster bolts, making them efficient killing machines.

Rancors are relatively well known in their galaxy at wide, having spread throughout it with the early spacefaring civilizations, long before the rise of even the High Republic. However their homeworld was forgotten, and the species' sapience was rarely ever recognized. Offworld breeds are generally smaller and perhaps even less intelligent than the original Dathomiri breed, and several have evolved into distinct species, such as the amphibious Tra'cors of Socorro and the Bull Rancors of Felucia. Can also be found in Jabba's palace.

Rancors are warm-blooded, and are classified as reptomammals along with other species, such as the Wampa.

They walk on two relatively stubby legs, using their longer forelimbs for catching prey, however they can certainly walk on all fours at times. Their flat faces are dominated by a large mouth, complemented with many razor-sharp teeth.

On their homeworld of Dathomir, Rancors possess good night-vision, although their vision is not as great as a Human's in daylight. This leads to the likelihood that they are a nocturnal species by nature.

Rancors are attracted to mates by pheromones. Young are usually laid in clutches of two at a time, and they are always born brown, but in special circumstances, such as mutations, their color may differ. While mothers care for their young, they do not suckle. However, the young do ride their mother - one dorsally, and one ventrally - until they reach maturity. Despite their nurturing nature, it's not entirely unheard of for a mother to eat her young.

Although usually considered nothing more than unintelligent beasts, the Dathomiri rancors are at least semi-sapient; caring beings who mourn their dead family members and who pass on oral histories of the matriarchal herds into which they are organized. Their native way of life appears to be very primitive, with them using their strength and size to hunt live prey across the planet's savannahs. At one point, the local Human population had become their primary prey species, until they were "domesticated" by the Witches of Dathomir, likely through force-sensitivity.

After their "domestication", symbiosis between rancor sow and female mount seems to have played a major role in dictating the subsequent structure of Dathomiri society. According to the rancor's own traditions, this symbiosis began when a warrior-woman met and healed an injured female rancor. By then mounting its back, the Human's sharper eyesight enabled the rancor to hunt better prey during the day, so that it grew in size and status to become a mighty herd-mother.

By the time that the New Republic was created, most of Dathomir's rancor populace now lived in symbiosis with the local Human clans, where they were continued to be used as mounts, and had begun learning to make and use armor and bladed weaponry with the help of the Witches. During the first years of the New Republic, a herd leader named Tosh, originating from the Singing Mountain Clan's rancors, had learned to read and write, and began to pass this skill onto other rancors of her group.

Around the years of the Galactic Empire, the last herds of untamed mountain rancors were driven into the plains and destroyed; however, a few decades later a wild herd wandered into the Great Canyon, indicating that a population had survived in the vast tracts of Dathomir's surface area that remained unexplored, beyond the knowledge of the planet's Human population.

During the era of the reborn Emperor Palpatine, rancors were exploited for their combat potential - perhaps not a great surprise considering that a fully grown Dathomiri rancor was capable of single-handedly destroying an entire AT-ST unit. Palpatine himself also kept several alchemically-altered Chrysalide rancors at his citadel on Byss.

Years later, a mutant rancor was discovered in captivity on Taanab, which was immune to conventional weaponry and could spew out toxic fumes capable of killing a Human almost instantly. Released by the Disciples of Ragnos as a diversion, it was slain by Jedi Knight Jaden Korr.

Because their skin is so tough as mentioned above, it is harvested as an excellent source of heavy leather for expensive vests and boots.

On a few worlds such as Ottethan, rancors continue to be used as mounts by warriors as they had been on Dathomir. On Lehon, young rancor herds still run wild and are descended from those brought to the world by the Infinite Empire, although some were still domesticated as beasts of war by the Black Rakata under The One.

Rancors are perhaps most closely associated with the criminal underworld, where individual creatures are kept as pets, guards, and status symbols. Perhaps the most famous of these individuals was the one owned by Jabba Desilijic Tiure, who kept his in a pit beneath his palace courts, dropping displeasing guests into to not only entertain the masses but to feed the beast.