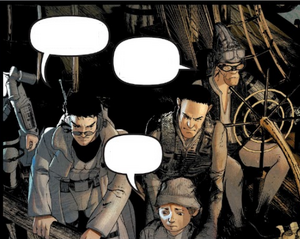 Sonata
The Ran are a species from the planet of the same name.

Ran are a humanoid race similar to humans from Earth, yet it is unknown if they are related.

Orginally from the world of Ran, the Ran discovered the world of Perdita, the Lost World, existing in the same system as their planet. Every five years the two worlds' orbits were close enough to send ships to colonize the world. However expecting a paradise they found the planet to be rifted with terrifying creatures and dangerous lands. The colonists only managed to survive thanks to the friendly Lumani. However after generations of peaceful cooperation the harmony has become under threat by the aggressive colonists from another world known as the Tayan.

Ran are known to be technological adept, but are commonly referred by the Tanyans as farmers, though they prefer to work with nature rather than against it. While the Ran on Perdita live a primitive existence, their technology seems to be on the level of the industrial era, as they were able to make one mission spacecraft. They are led by matriarchs and a non-violent people, only resorting to conflict unless absolutely necessary.

Retrieved from "https://aliens.fandom.com/wiki/Ran?oldid=168825"
Community content is available under CC-BY-SA unless otherwise noted.