"Really? Have you really seen all there is to see? Are there no mysteries left for you?"
―The Rainbow Faces question the knowledge of the dinosaurs. 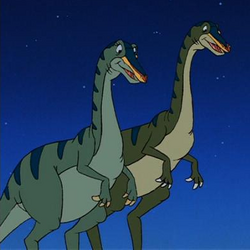 The Land Before Time
Rainbow Faces is a moniker assumed by a pair of sapient celestial visitors; believed to be extraterrestrial in origin; which visited Earth in the Mesozoic and lived among the native dinosaur species for some time.

The Rainbow Faces are so named because of their multi-colored bills. Otherwise their physical appearance is similar to a Gallimimus, although whether this is their actual appearance or a false one intended to blend in with the natives is not known. Two individuals have been observed: one male and one female, although the relation between them isn't known either.

At some point, the two Rainbow Faces joined the multi-species community of dinosaurs living in the Great Valley. The other dinosaurs regarded them as harmless, but strange, due to the Rainbow Faces' tendency to speak in riddles and ask numerous questions.

After the young Littlefoot witnessed a "falling rock" (a meteorite), the Rainbow Faces were responsible for planting the rumors about the magical Stone of Cold Fire, and questioning the dinosaurs about whether they could believe in anything other than what their eyes could see. They instigated the dinosaurs to wonder about what could be out there, "beyond the Mysterious Beyond" (which is the name the dinosaurs give to the lands beyond the Great Valley). At this point, it appeared that the male Rainbow Face was about to exemplify their point by revealing the existence of some "enormous" something; but was interrupted by the female before he could do so.

Whatever the Rainbow Faces' intentions were, they seemed to be acting in some kind of mission, as at one point the male asked his colleague on whether they should help Littlefoot and his friends, but she answered that they weren't allowed to.

Shortly before their departure from Earth, the Rainbow Faces met with Littlefoot again. At this point the young Longneck took the opportunity to ask whether the falling rock he had seen was indeed the mysterious Stone of Cold Fire. The Rainbow Faces told him that it wasn't, but that the identity of the Stone didn't matter; it was Littlefoot's quest to discover the truth that was important. The aliens told him to continue to ask questions, but refused to outright explain the mysteries of the universe (although the male almost did tell Littlefoot that the lights on the night sky were actually distant worlds, but was once again interrupted by the female before he could do so). After that, they told Littlefoot to look away as they vanished. Their singing voices could still be heard as Littlefoot watched a mysterious light flying upwards and disappearing among the stars.

Retrieved from "https://aliens.fandom.com/wiki/Rainbow_Face?oldid=185297"
Community content is available under CC-BY-SA unless otherwise noted.