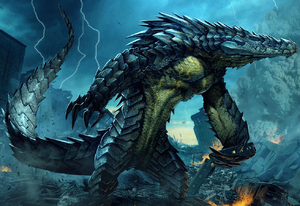 Raiju is a kaiju in Pacific Rim.

Raiju resembles a crocodile. Its head, back, limbs and tail are covered in jagged, overlapping scales with the rest of its body having much smaller, interlocking scales. Its has yellow streaks on its chest and stomach. Each hand and foot has four sharp claws. Its head armor is not really its head but a casing that opens up to reveal its actual head. The inside of this casing is bioluminescent. It has four eyes with yellow irises and dark pupils. Its weak point is the inside of its mouth. It has bent feet that allow it to swim extremely fast. Raiju displays crocodile like behavior, stalking opponents from the darkness before attacking.

Raiju, along with Scunner, emerge from the breach on January 12, 2025. The two kaiju attack Gipsy Danger, with Raiju tearing off its arm. Raiju circles back around for a second attack, ramming Gipsy's sword head first and high speed. Raiju is cut in half from head to tail and dies instantly.

Retrieved from "https://aliens.fandom.com/wiki/Raiju?oldid=163189"
Community content is available under CC-BY-SA unless otherwise noted.