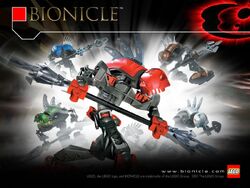 Evolved form of Kraata; Has 42 variants

Rahkshi are a species of evolved Kraata. They are barely living, their minds are still in the suit, but they cannot move without another kraata in the suit.

Kraata can be mutated into Rahkshi by being exposed to Energized Protodermis. Then, another Kraata of the same power must enter the compartment on the Rahkshi's back to take control of it. Rahkshi have all of the power and possibly greater of a level-6 Kraata of its color. However, without its staff, its power is weakened. They can also enter a hover mode by stretching out their legs, placing their feet together, and breaking apart their staff.

Rahkshi, when not being commanded by a Makuta, act like wild beasts, and are extremely territorial and have a nasty habit of destroying everything in their path. However, they display this latter trait even when under command, which is odd, due to their supposed sapience.

Retrieved from "https://aliens.fandom.com/wiki/Rahkshi?oldid=189265"
Community content is available under CC-BY-SA unless otherwise noted.