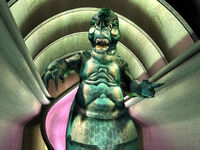 Once a slave caste among the descendants of the Saurians, the Raas were sold as slave laborers throughout the Orion Sector. They eventually freed themselves after a vast and bloody revolution. By the era of Master of Orion 3', the Raas has found a new society with their own governments and religion. The Raas's industrious natures are still there, making them a highly productive race. Now working for themselves, the Raas are eager to take their own place in the history of the Orion Sector. They are not warriors, however, and so are inexperienced when it comes to combat.

Retrieved from "https://aliens.fandom.com/wiki/Raas?oldid=165958"
Community content is available under CC-BY-SA unless otherwise noted.