Transformers
The Quintessons are an ancient race of bizarre mechanoids who are prominently regarded as the creators of Cybertronians.

Quintessons appear to be mostly - if not entirely - mechanical, although one theory is that they were once organic beings who slowly added more and more cybernetic parts to themselves until they were completely mechanical. However they came to be, though, there are several body styles seen amongst the Quintesson society, henceforth referred to as their castes.

Quintesson Judges (alternatively known as the Imperial Magistrates) are the most prominent and infamous caste of Quintesson, as well as the apparent leaders of the race. They are built upon an inverted egg-shaped body which floats upon a beam of energy, with several wiry tentacles for physical manipulation.

However, by far their most distinctive physical characteristic would be their five rotating faces. Each face represents a different aspect of the Quintesson, though for four of the five faces, there are conflicting reports as to what each represents. The order of these faces are unique to each judge.

In certain universes, Quintesson Judges are hybrid beings created by the Quintesson Scientist whose three heads are based on the native lifeforms of whichever universe they travel to. One notable Judge was the former Decepticon Starscream, whose other heads were of a Velgrox and a Grey.

Quintesson Bailiffs have tooth-lined snout similar in appearance to a Terran lamprey. They usually served as guards in the Quintessons' court and can transform into robotic, bipedal alligator-like creatures.

Quintesson Executioners (also known as "Gatekeepers") are humanoids tasked with putting an end to the victims of Quintessa's courts by throwing the switch that drops them into their Sharkticon pits.

Quintesson Prosecutors (also known as "Inquisitors") are the second-most common type, often seen in positions of authority. In court, they are the ones who ask for the Judges verdicts and occasionally let the defendants say something in their defense, for all it matters.

In most universes, Quintesson Scientists are somewhat similar to the Prosecutors in construction, though they feature more bulbous heads and somewhat human-like faces with beards. The only exception to this is the unnamed Scientist who traditionally oversees the creation of new hybrid Judges.

Security officers appear to have been an ancient model of Quintesson, and possibly the only kind with built-in offensive capabilities, some having one set of arm-tentacles replaced with over-sized blasters. These blasters availed them naught, however, against the Trans-Organic beasts. It is unknown if any of this model of Quintesson exist in "modern times".

Humanoids are an exceedingly rare type of Quintesson.

Regardless of what universe they hail from, the Quintessons themselves have absolutely no fighting abilities whatsoever. Ultimately, they are absolute cowards if they have nothing to hide behind.

The Quintessons' history and clandestine machinations are tied together with that of the various Transformer subspecies, along with connections to both Primus and Unicron.

In the Primax and Uniend universal clusters, the Quintessons prefer subtle manipulation combined with scheming and advanced technology over brute force. If neither of them work, they can fall back to their legions upon legions of deadly Sharkticons and Allicons or their fleets of battle-ready starships.

In some universes, the Quintessons travel across the multiverse using their multiverse drive and passed judgement on which universes deserved to live or be destroyed. If the universe was found guilty, then the acting Judge would oversee the destruction of the universe by using unspace matter to obliterate everything it touches.

In negative-polarity universes, the Quintessons are portrayed as an enigmatic and benevolent species holding sway over a large section of space known as the Quintesson Collective. They share their technology and cooperate with many other species, regardless of whether they are organic, technorganic, or mechanical. They use culture itself as a unifying notion instead of evolutionary origins.

Dimensional-travelling Quintessons possess a multiverse drive, allowing them to travel from one universe to the next. Across the universes his kind of passes judgement upon, the Scientist has developed a fondness for collecting the native iterations of the Decepticon known as Soundwave.

Negative-polarity Quintessons once perfected zero-point energy engines, food and parts replication technologies, and advanced biomedics, thereby allowing any individual to change their features, organs, and overall designs. This would eliminate such things as scarcity, mortality (which they consider "material value"), and even the concept of "species". These technological advances are shared and freely available to all those who join their "ultra-species". 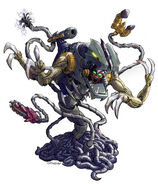 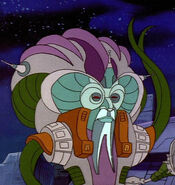 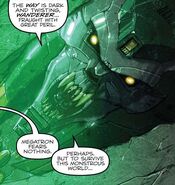 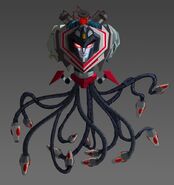