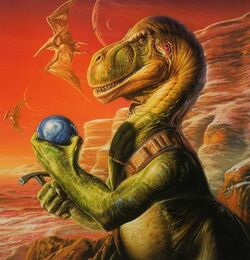 Quintaglio Ascension Universe
The Quintaglio are a race of sapient theropods. They live on a moon (referred to as "Quintaglio Moon") orbiting a gas giant that they refer to as "the Face of God".

The Quintaglio have evolved from Tyrannosaurids directly, and are directly descended from Nanotyrannus when they were removed from the Earth 65 million years ago to give them a chance to continue their evolution. Genetically modified by their alien benefactors to push them in the right direction, combined with their isolation on the Quintaglio Moon, ensured that they would evolve into a sapient species, and sure enough they did 65 million years later.

Having evolved from the great Tyrannosaurs, they resemble miniature version of them, but this is not the only feature common between themselves and their mighty ancestors. They remain as carnivores and as such, continue to have massive, blocky heads with large jaws filled with rows of sharp, serrated teeth. Their necks are short and muscular while their torsos are stocky. They also possess solid black and forward-facing eyes, thick muscular tails, and powerful hind legs which end in three birdlike talons.

This is not to say that there are no differences between their ancestors and them, and they in fact vary from their forefathers in several significant ways. They have regrown their once-atrophying arms, and have readapted their long-lost other fingers, placing their digits back at five per dexterous hand, with four fingers and an opposable digit. Surprisingly, most Quintaglios are left-handed. Each finger terminates in a curved, retractable claw, which can be extended when the Quintaglio is threatened, although they can also be extended and retracted at will. They are much smaller than any known full-grown Tyrannosaur, although they are still a large species; old adults stand about 8 feet (2.4 meters) high. Another significant difference is their bodily stance: rather than standing with their backs parallel to the ground as in normal theropods, they usually maintain a semi-erect posture, although they will revert to the typical theropod design by stooping forward while running. Perhaps the most significant difference however is that they are far more intelligent, with a brain capacity that appears to surpass humans.

Thanks to their ancestry, they are most certainly dinosaurs in the literal sense, but also possess traits more reminiscent of lizards, although whether this was through natural adaptation or through genetic manipulation is unknown. They have obtained limited regeneration, allowing them to regrow a severed limb or tail, while complex and vital structures such as organs cannot be regrown. Males also possess a dewlap sack on their throats, similar to frogs or some types of birds. This can be inflated with air when they are sexually aroused or in "dagamant". Like many reptilians including crocodilians, Quintaglios continue to grow throughout their entire lives, although this growth process slows with age. They also have a small salt-secretion gland beneath the surface of the muzzle, similar to certain lizards, with the opening for it being a very tiny hole halfway down the side of the muzzle. This is only really be visible to the viewer in an extreme close-up view.

Their hides are tough and leathery, as one might expect. In an evolution parallel to mankind itself, Quintaglios have lost most of their scales and scutes like Humans have lost most of their body hair, although some of this vestigial armoring may still be present in individuals, proving that the gene has only receded into the recessive gene category. The hide is almost entirely green, although it may be freckled, mottled, or splotched with brown or yellow in some individuals, and with black in elders. Perhaps the oddest evolution they possess is the fact that nearly all of them cannot lie; this is because their muzzles naturally turn blue when they say anything untrue, and because of this fact, the color blue is reviled amongst their kind as "The Liars Tint". Those very few individuals who can lie without their muzzles reaching this shade are called demons or "Aug-Ta-Rot", which literally translates to "Those who can lie in the light of day". While they are rare, they do exist, yet this fact is not widely known and for the most part Aug-Ta-Rot are believed to be a myth.