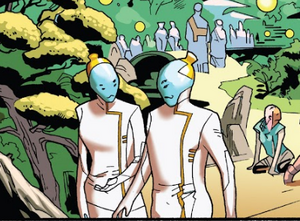 The Quez are an alien species that existed 65 million years ago.

The Quez are blue-translucent skin humanoid beings. They possess four eyes and at the backs of their cranial is an orange stub.

The Quez are a species of capitalists that sell their bodies. They are franchised across the universe and allow other races to swap their bodies. They exercise their clients bodies whilst their clients allow themselves to relax inside the Quez bodies and enjoy every indulgence at one of the Quez spa resorts. Due to their obsession with money they are regarded as the most greediest species in the entire universe.

Retrieved from "https://aliens.fandom.com/wiki/Quez?oldid=182772"
Community content is available under CC-BY-SA unless otherwise noted.