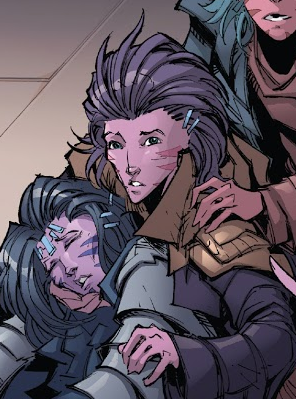 Stone Star
The Quellarens are an alien race from the planet Quell.

The Quellarens are a humanoid race with violet skin. Their faces possess double slashes on their cheeks. They are noted to withstand more punishment than other species.

Quell or Quellaquaserris as the natives call it was originally a peaceful world. However as more offworlders visited, weapons from a hundred worlds were brought, bringing a hundred years of brutal conflict among the Quellarens. House Drenne eventually emerged victorious in the war and brought peace to the planet.

However the peace came at a price of subjugating the other clans through genocide using weapons from offworlders. House Drenne became a symbol of hate and fear to the other clans.

When the Stone Star, a traveling gladiatorial arena arrived on Quell, the planet was in the middle of a military coup. The Drenne Royal Family attempted to warn the authorities on the Stone Star but the head of security was in league with the anarchists. The Royal Family was all killed save for Princess Kikanni who was saved by a scavenger by the name of Drail and his friend Kitzo. They managed to get to the gladiatorial pits where they were sheltered by veteran gladiator Volness.

After the rebels discovered the princess to be on the Aston Starr, they attempted to intimidate the nomadic arena to land. The commander of the vessel Lord Grandiose refused to be cowed by their demands led the Stone Starr in an escape to the n cut system.

Retrieved from "https://aliens.fandom.com/wiki/Quellaren?oldid=153586"
Community content is available under CC-BY-SA unless otherwise noted.