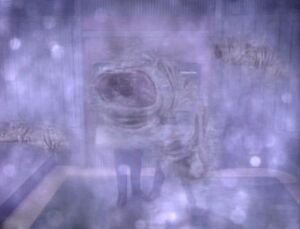 Quasi-energy microbes are microscopic lifeforms which exist as both matter and energy simultaneously. They naturally inhabit the distortion field caused by a stream of plasma running between two stars of a binary system. They are also known to infect humanoid hosts, causing some parts of the host's body to pain and glow occasionally. The microbe's physical appearance seems to be reminiscent of a brown leech-like organism with a wide mouth.

Quasi-energy microbes were discovered by the Federation for the first time in 2369 by the starship Yosemite, which was sent to study the plasma streamer phenomenon, occurring in a binary star system in the Igo Sector. The Yosemite crew decided to transport a plasma sample on board, unknowingly bringing along the microbes. The microbes responded by rupturing the plasma container and infecting some crew members. The crew attempted to use the transporter's biofilter to eliminate the microbes, but it seemingly didn't recognize them due to their quasi-energy nature. Both crew and microbes ended up trapped inside the transporter's pattern buffer, a device used to temporarily store the matter stream during the transportation.

Later, when the USS Enterprise-D arrived to investigate the fate of the Yosemite, Reginald Barclay saw oversized versions of the microbes while he was being beamed down. He got infected by the microbes and the Enterprise crew decided to use a similar technique, but making modifications in the biofilter so that it would remove the microbes successfully. It also turned out that the giant microbes Barclay had seen while in the matter stream were actually the Yosemite crewmembers, which were appearing as the microbes for some unclear reason. The quasi-energy microbes were finally removed from their hosts and returned to the plasma streamer where they had been found.

Retrieved from "https://aliens.fandom.com/wiki/Quasi-energy_microbe?oldid=180749"
Community content is available under CC-BY-SA unless otherwise noted.