Alien Species
Register
Don't have an account?
Sign In
Advertisement
in: Sapient Species, All Tomorrows Universe, Insectoid Species,
and 15 more 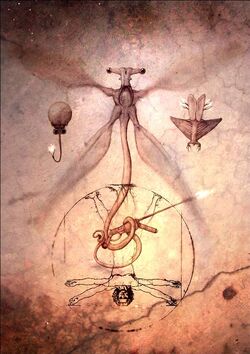 Virtually any planet and possibly space

Either extinct or subjugated after their defeat at the hands of the United Galaxies, or possibly fled from the galactic supercluster

Nemo Ramjet
The Qu were an ancient, nomadic, highly advanced alien species that split Humanity as it was known into various new species with varying levels of sapience and ability.

The Qu were four-winged insectoid creatures, bearing a slight resemblance to dragonflies, with a single tail-like tentacle for grabbing and using objects. Their heads bore two eye stalks, one protruding from each side, and they had two long mandibles. While their main torso appears about as big as a Human torso, their appendix makes their full body length about twice that of Humans. Their life cycle involved an aquatic larval stage, although their lifespan is unknown. Other elements of their native environment and physiology, such as what gases they breathe, their native gravity, and their diet, are also unknown. It is likely that their known form is not the true appearance of the Qu, but rather, the result of genetic alterations of their species at some point in the past, akin to the alterations that turned Humans and Martians into Star People.

The Qu follow the agenda of enigmatic higher forces that oppose the existence of sapient life, believing it to be a a plague that would inevitably eradicate the natural order. [1] To serve their purposes, they act as intergalactic nomads, stopping in galactic spiral arms for millions of years before moving on. They remorselessly alter sapient beings in proportion to their crimes against the Qu's mission, starting with the mere act of sapience, and increasing for having caused extinctions or fervently resisting the Qu. These other sapient species are seen as mere objects to be rebuilt into "practical" or entertaining forms. Greater criminals against the Qu are made into a form that gives them a tortured existence, as seen with the Colonials. Like the Gravital, the Qu are not truly evil or full of hate to all other lifeforms, but are merely far too indoctrinated by their own religion and extremist beliefs. Qu architecture, as seen in monuments that are left on worlds they alter and colonize, consists of massive, featureless pyramids, which serve an unknown function, and are not torn down or otherwise removed once the Qu leave for another galaxy.

The Qu have incredibly advanced technologies, able to cross galaxies. While their exact weapon capabilities are unknown, they were able to overpower almost every Star Person colony in a single swift invasion, meaning that their weapons surpassed those of the Star People, who had weaponry that could nova stars and destroy star systems. Their most notable and advanced technology is their genetic manipulation technology, which is capable of altering existing lifeforms into an array of different forms, even removing sapience. The exact method of doing this is unknown, but it is possible that it is done utilizing nanotechnological drones.

Qu ships are apparently like larger versions of themselves, with kilometer spanning "wings".[2]

At the time of the first contact between Qu and Star People, the Qu were almost a billion years old, constantly travelling the galaxy from one spiral arm to the next, in giant, epoch-spanning mass-migrations. As masters of genetic and nanotech manipulations, they constantly improved themselves and remade the worlds they visited. They were most likely the ones who created Panderavis from Earth Therizinosaurs.

Their religion demanded them to remake the universe as they saw fit and they saw themselves as gods. This dogma was rooted in what had been a benevolent attempt to protect the race from its own power, but was eventually blindly followed by them without any question.

Humanity was only a small obstacle to them. The Qu were offended that there was another species that remade the worlds they visited, and they remade the Star People into many different creatures.

One day, the Qu left the spiral arm that was once populated by the Star People, leaving behind hundreds of worlds inhabited by the remade descendants of humanity.

Many millions of years later, the human descendants in the form of the Asteromorphs, the Terrestrials and the Subjects formed a vast empire spanning the Milky Way, united with other galaxies such as the Amphicephali's, and finally avenged their ancestors by subduing the Qu in a conflict of incomprehensible scale, possibly rendering the Qu extinct, subjugated, forced to flee known space, or brought to some stranger fate.